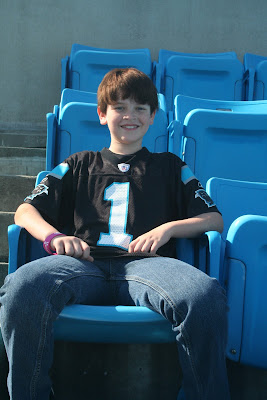 I have so much to be thankful for---and this is SUCH an obvious one---but it's not JUST Joshua---even though I'm SO thankful for him. BUT, what I'm really thankful for today is the true privilege I have to be such an intimate part of his life. Stay with me, now---when both parents are in the home they share the duties/privileges of parenting-one parent will take the kids out to play, another will do something else--then vice versa. And, of course, you do lots together as a family, too, but you don't do EVERYTHING together. But when you are alone, you "have" to do it all---hanging out, throwing the ball, doing the homework, running him around to activities, etc. For awhile after "the craziness" started I was so overwhelmed with doing everything with Joshua----I didn't really mind, it was just so, well, ALL THE TIME.  And here's the grateful part: I have just turned those weary, frustrated, scared thoughts on their heads. I began to look at the entire situation as a blessing---not that I had the "duty" to be with my son 24/7, but that I GOT THE PRIVILEGE to be with this amazing boy 24/7. Now, I am not naive; I know there will be plenty of times in my future that I will be wishing for a moment alone---BUT, I have also raised two daughters already and realized that the time went by TOO fast. So I am capturing those rogue pity party thoughts and remembering how blessed I am to be able to be this sweet companion to this amazing 10 year old.

In early 2011 I began to realize that I had to be more engaged in Joshua's life. I was trying to come up with things to do together that we both enjoyed. We read all 7 of the Harry Potter books together while he was in 4th grade---his first time! After we finished each book we'd watch the movie---(this was a VERY BIG DEAL because we Nelson's are just a little bit freaky about Harry Potter. If you don't believe me, see this post, and this post, and this one. You get the point.) He taught me how to play chess (I'm really awful---which is quite fun for him), we play a lot of Uno or Go Fish, etc. But, thanks to the Madden 2011 game for PSP, my son is now a HUGE----dare I say, OBSESSED NFL fan.

Now, I grew up watching Staubach, Ed Too Tall Jones, Tony Dorsett, Drew Pearson, Randy White---yep, I watched football EVERY Sunday---I KNEW football, I knew Professional football. I hated the Steelers. And the Redskins---I was die hard. THEN came Jerry Jones---he fired my coach and it was ALL OVER. I'm serious---I probably hadn't watched an entire pro game that wasn't the Super Bowl (commercials---you know?) since that fateful day in February of '89. We filled our football void with a much more satisfying football scene---college ball. SO exciting---fun, more unpredictable--did I say FUN....Vince Young's amazing performance at the Rose Bowl in 2006---you get the picture. So, it happened to be a pretty bitter pill to swallow when my son became obsessed with the NFL---I was over them---I was DONE---Sundays are nap days.....but there was this little thing called "engaging".

I had printed out a free printable from one of my favorite bloggers, Becky Higgins that says this: The purpose of the task is to strengthen the relationship. SO, whatever the task---homework, lego building, reading together, yard work, the PURPOSE is to STRENGTHEN the relationship. This was a little quote that just stuck in my head. And whenever I found myself wanting to run to my room and hide when my boy wanted to go throw the ball or play chess, I would remind myself of this. It began to change me--It changed the way I looked at each "task"---not just with Joshua, but with my girls, my friends, my co-workers. This quiet little quote became a screaming mantra.

SOOOOOOO-(I warned you I was a rambler) two weeks ago, I found myself driving up to Bank of America Stadium in Charlotte, NC and hiking up to our seats at my first NFL football game. 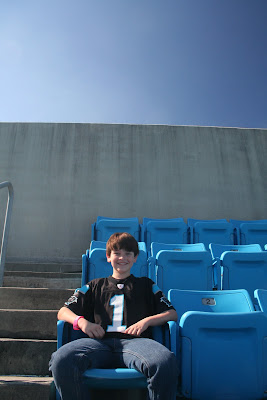 We were 3 rows from the top---NEVER AGAIN will we sit so high---I nearly had a heart attack the third time we went up----but, Joshua and I went to a Panthers game....we were there. 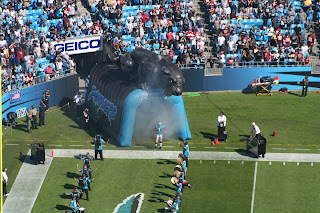 We saw Cam Newton's dance upclose and PERSONAL---well, not really "close", but you know what I mean---LIVE, in person! We spent 6 hours in the car together---what a privilege! 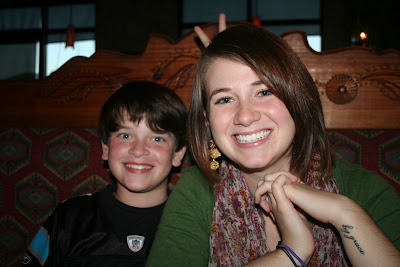 We picked up Hannah for dinner and had such fun----we got to see her new ink (I feel so cool just typing that---HA!) We made a memory that will NOT be forgotten (except the 32nd row part---I'm trying to forget that!) 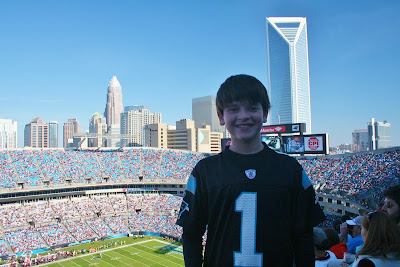 SO, my grateful heart today is so glad to have the opportunity to develop a deep relationship with my son. I would LOVE to have his sisters back at home and have that much time with them. That's not possible---so I will appreciate the unique opportunity before me and be thankful. 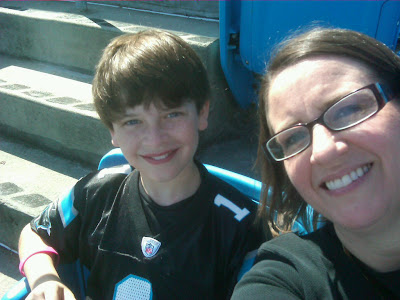 Labels: 30 days of Thanks, family

Wow, Kathleen! What a tribute to motherhood! You've taken the less than attractive threads underneath your life picture and are weaving them back into the picture to create a more brilliant tapestry.

as a mother i needed hear this. to have my thoughts flipped. also I need to know that people still believe in the panthers. what a smart man-boy you have!

Kathleen
Raleigh, NC, United States
I'm so grateful for your visit today. I hope you enjoyed stopping by! I can truly say with the Psalmist, "You are my LORD, I have no good apart from you...the LORD is my chosen portion and my cup, you hold my lot. The lines have fallen for me in pleasant places; indeed I have a beautiful inheritance....You make known to me the path of life; in your presence there is fullness of joy; at your right hand are pleasures evermore." Psalm 16